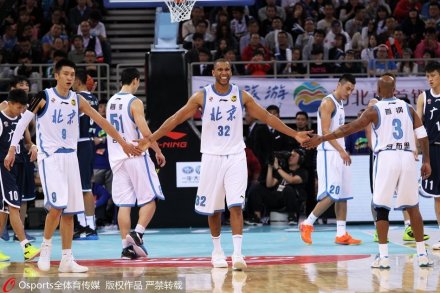 There’s little to add to what results already highlight: Liaoning is the best team around, Guangdong and Guangsha are runners-up and Beijing comes 4th. Since this is no power ranking, let’s stray away from sheer standings and focus on three teams: Beijing, Guangsha and Tianjin. What do they have in common?

Well, for starters three of the best guards around the Middle Kingdom wear their jerseys, and it is not a given. Having Marbury is still a luxury come crunch time, despite doubters’ opinions on the matter. Jamaal Franklin, fresh off a playoff bout alongside Randolph, Gasol and their Grizzlies, was in a hot seat as a replacement for fan-favorite Jonathan Gibson and turned that heat into firepower to boost his CBA game. Quincy Douby, even at the thoroughly improved level of scoring prowess he has to face off against on a nightly basis, still is a top-5 scorer and a threat to pour 50+ points on unready opponents.
Among the similarities there’s no mention to be made on records, though: while Beijing has been good and Guangsha excellent, Tianjin is letting fans and experts down in a major way. But let’s take one subject at a time.

1 – Beijing and their versatility.

One great asset every point guard loves to have is a wide range of offensive options, and no other team in the CBA has more than the Ducks. Being a 40% 3pt shooting team is not the cause, but the effect of this: Marbury can either play the 1 alongside Li Gen or the 2 paired with Sun Yue, who himself can play 1 to 4 and spends a good chunk of time at the 3, often when Marbury is on the floor with Li. Moreover, he’s a 4 alongside Ji Zhe or in a small lineup where the aforementioned guard duo is paired up with either Fang Shuo or Zhang Qingpeng. Both of them are PG that can shoot set threes at a good rate. But that is possible because Li Gen himself, a natural at the 2-spot, is a more than capable 3 as well. Zhai Xiaochuan, who isn’t seeing much playing time this season, is a tweener, 3-4, and so is Zhu Yanxi, 4-5. Morris himself fits well as a center when paired with the latter, and as often as they play together it’s still difficult to distinguish who’s being the center and who the PF, because Zhu Yanxi is a stretch big man and Morris does get a lot of midrange touches as well. Is it over? No, Morris sometimes plays alongside Zhang Songtao, a classic center, as the 4. In terms of offensive options for Starbury to explore, he can play pick’n’roll with Morris, who can either roll all the way or stop for a “short roll” that is so often used both in NBA and European basketball, or he can pick’n’pop with Zhu Yanxi, an option that Marbury seems to like a lot, since he constantly looks to find him for a wide open shot. Since Marbury is best suited (but again, not forced or at a disadvantage when the opportunity fails to present itself) going to the rim, he seems to like especially pick’n’pops, sometimes even with Morris or Sun Yue. When he runs to the rim, it’s not necessarily about finishing, either: of all Ducks playing consistent minutes only Morris and Sun Yue aren’t around 40% beyond the arc. Sun Yue himself is a good fallback option as a ballhandler, even when the Statue is on the floor, because of his elite size and reliable skills.
Basically said, Beijing could hardly play better than this, and yet they’re not the best team in the league. And it’s not even close.

In case you didn’t know, Wang Zheng’s per-40 stats are 25,9 ppg and 11,1 rpg. Quite surprising, aren’t they? Yet, that’s the point. Guangsha often plays either Holman or him, and obviously Holman gets the better hand. Yet Holman is supposed to be a PF, not a C, and Wang is 7’1″. Stats per-40 usually don’t mean too much, but certainly Wang has been efficient enough to make me at least doubt he couldn’t hold his own in a larger role. Li Jinglong, the young guard, has been surprisingly efficient as well. He’d have 16,3 ppg in per-40 measurements, but of course he hasn’t played much and is a black hole when it comes to pretty much everything else. Guangsha has a deep rotation and never gives players too many minutes on the court, but guys like Zhao Dapeng and Zhang Hanjun have been lackluster in almost 20 minutes per game. It’s good they get time now, but sooner or later a decision must take place: who stays in the rotation and gets more minutes?

When your core is Zhang Zhihan, Meng Xianglong, Zhang Nan, Shang Ping and Tien Lei one thing is clear: you have at least one good shooter (Zhang Nan) and a bunch of people at the 2-3-4 spots. You need a PG, preferably a good shooting one, and a C. As good as Williams and Douby are, the former is not a center and the latter is not a PG. They’re respectively a PF and a G, exactly taking up Shang Ping and Zhang Zhihan’s spots. You can’t just “get good imports”, you must get good imports for your team. Douby is a volume shooter, and if his teammates can’t supply him with range he just won’t pass the ball, nor will he penetrate consistently: the floor will be clogged. Williams has played great basketball, but he’s 6’9″ in one of the few leagues where you can easily find 7-footers. He must play at power forward. The result is a team with great names but little going on chemistry-wise, and that’s at the expense of every player involved. Get smart, Tianjin.

This is all, for now. Take care!